RNW Media builds digital communities for social change. We work to bring young people together in an alternative digital civic space where they can engage in constructive dialogue, focus on their aspirations, realise their rights and contribute to making their societies more inclusive. Constant monitoring of our online data tells us how many young people we are reaching and whether they are engaging with our content and each other. The next step is to establish whether RNW Media is having a real-world impact on young people’s lives.

The report Creating Change through Digital Communities is the result of research conducted in 2019 as part of an evaluation of our Citizens’ Voice and Love Matters programmes. An open survey question asked users whether they could give an example of a change they had experienced through engaging with the platform. The responses were analysed to answer the main research question: To what extent do returning users experience a change in knowledge, attitude or behaviour as a result of engaging with the platform? 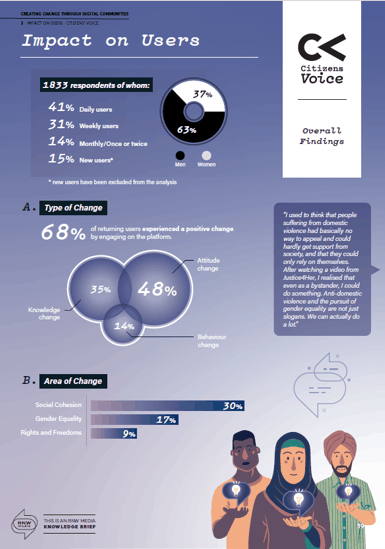 Experiencing change
A large majority of both Citizens’ Voice and Love Matters users reported experiencing one or more positive changes as a result of engaging with the platform (68% and 69% respectively). Users of Citizens’ Voice platforms in 7 countries reported an increased acceptance of different opinions, including more respect for opposite viewpoints, and learning to see social issues from different angles without being judgmental. Users also said they became less prejudiced against stigmatised groups. Gender equality was another area where users became more open to different viewpoints and they also reported that they now express themselves more on topics that matter to them. In some countries, young people mentioned they were more likely to speak up and act against violence. 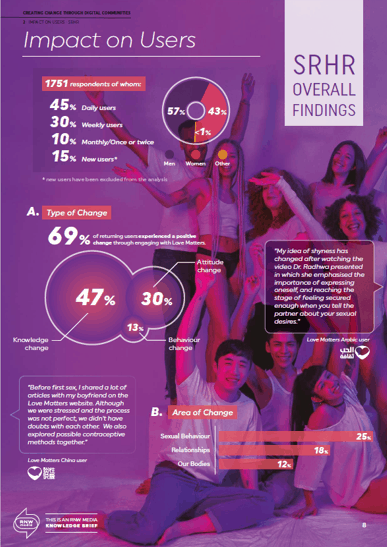 Clarifying misconceptions
Users of our Love Matters platforms in Nigeria, DRC, Egypt and China experienced a range of positive changes relating to their sexual and reproductive health and rights (SRHR). They had an increased willingness to discuss, accept and explore sex-related topics as well as sex itself, and some were able to enjoy safer and more pleasurable sex as a result of engaging with the platform. Many users reported a better understanding of how to detect abusive relationships as well as build healthier ones. Misconceptions about various sexual concepts such as masturbation, menstruation, virginity and desires were clarified and many respondents in China expressed greater acceptance of LGBT persons and of the idea that women have a right to pleasurable sex.

read more
COVID-19 vs Elections – a tough choice in Burundi

”The truth is what will guide us”
Scroll to top