Love Matters is RNW Media’s flagship sexual and reproductive health and rights (SRHR) programme. Its approach is pleasure-positive–talking about safe, healthy and pleasurable ways for young people to explore love, sex and relationships rather than taking the conventional focus on dysfunction and avoiding disease. But when expanding the Love Matters programme to new countries, it became clear that this approach was not always going to be possible.

Love Matters Egypt has been very successful in targeting a young audience with taboo-breaking content in a very conservative setting. It seemed a logical next step to expand the Arabic-language platform into Yemen where RNW Media is active with a well-established Citizen’s Voice platform Manasati30. We always carefully research the local context before launching new activities, and it became clear there were huge difficulties and risks involved in launching a Love Matters Yemen platform. Local Yemeni researcher Entesar Saleh was commissioned to draw up a context analysis of SRHR in Yemen in November 2018. She began her report by pointing out that:

Researchers of this topic face a lot of difficulty due to the sensitivity of the subject. The outcomes of interviews, discussion groups and focus groups are susceptible for biases and insincerity even when anonymity is assured. The inherent and deeply rooted taboos around sex and intimacy and the highly intimidating consequences for free expression are key obstacles.

Saleh notes that two Focus Group participants who took part in an earlier research project in 2017 had told her they did not answer the questions truthfully at the time even though they were in favour of such research taking place. Her report concluded:

Rights-based approaches in Yemen are very sensitive as they inevitably challenge the fundamental components with which the majority of Yemenis still strongly identify and the religious and political institutions that foster and fiercely defend those components. The mission and vision of RNW Media’s Love Matters are likely to be perceived as hostile to the religion and society. This could inspire strong adverse/defensive social reactions and/or reputational damages for RNW Media’s strategic objectives in Yemen.

Risks and limitations
This report generated a far-reaching discussion about the best way forward, including input from the local Citizens’ Voice team in Yemen who were very aware of the risks. Those risks were illustrated starkly when Yemen Youth Panel (known locally as Manasati30) partnered with a local group organising a film festival in Sana’a. In the run-up to the festival, a poster advertising a documentary which featured a photo of a well-known husband and wife team of artists caused a storm of protest. Critics said the image was too intimate and was ‘damaging to morality’. The Yemeni government then stepped in and cancelled the festival. This public and official reaction to an artistic photo of a fully dressed married couple who were not physically touching confirmed our concerns that Love Matters was not the best way to achieve our SRHR strategic objectives in Yemen. 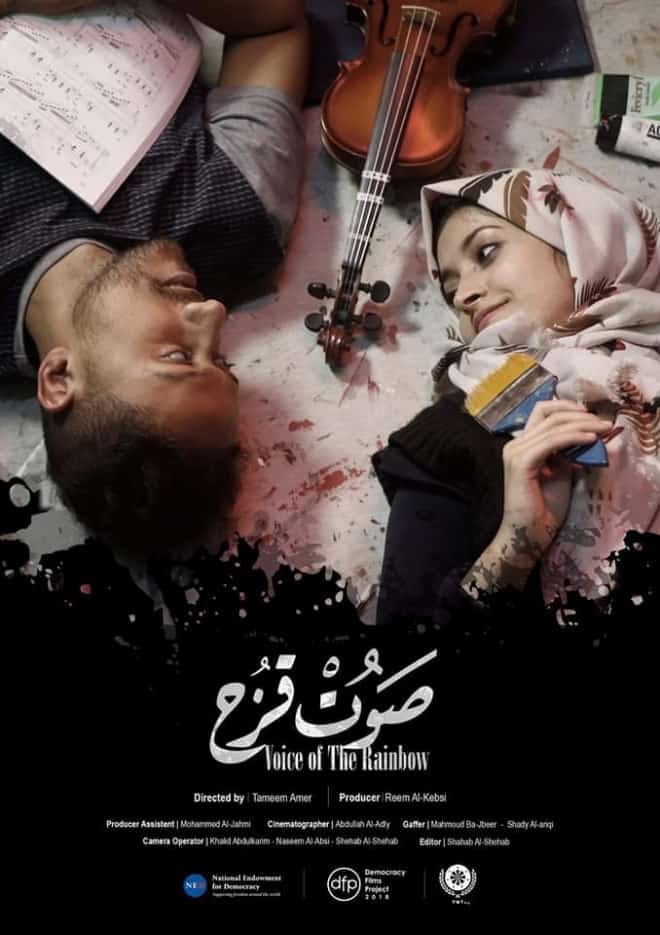 The image that attracted public and offical condemnation in Yemen

Local partner
The decision was made to look for a local partner organisation that was already active in SRHR and explore the potential for cooperation. A partner mapping identified Yamaan Foundation as the best option due to their free hotline, through which they provide SRHR information to their large social media community. The Shabab-line (Youth-line in English) is a toll-free number young Yemenis can call to access confidential, safe, non-judgmental and accurate information about sexual and reproductive health and family planning. Callers speak to a male or female counselor, and if necessary, a doctor. Since launching in 2011, Shabab-line has grown from 300 to 5,000 calls per month. Shabab-line also has a Facebook page with 120k followers. Followers can access information on the page and discuss SRHR and family planning issues. Shabab-line posts an open call for questions every week using the hashtag #doctoronline.

Building digital capacity
While the Shabab-line call centre team and project are very strong, they tell us their online capacity is low. With more human resources applied and better knowledge and skills they could do more, they say. So, our colleagues from RNW Media in Yemen and Egypt, who are experts in using social media for positive social change and supporting young people’s SRHR , will be working with the Yamaan Foundation to build their digital skills and help them reach a higher level of online engagement with young people on SRHR related topics. As a first step in that process, a Data Research project has been carried out, looking at user engagement with Shabab-line across their three different channels – the hotline, Facebook direct messages and Facebook comments under #doctor_online posts.

Key findings of the research were that overall, sensitive topics are discussed via the hotline instead of Facebook and that women tend to engage more via the hotline, whereas men are generally more present on Facebook. These findings mean Shabab-line can consider focusing their Facebook activity on less sensitive issues and redirecting users to the hotline for more sensitive topics. The team may also want to look at how they schedule their team – putting more of their female staff on the hotline to deal with women callers.