RNW Media’s country teams have been responding to the crisis in the United States following the killing of George Floyd by a police officer with analysis and stories reflecting their context and communities. Habari RDC has taken a sharp look at the political response in various African countries and critiqued both political appropriation (“récupération”) on the part of some government figures and the thundering silence on from others. And Yaga shared the experience of a young Burundian woman based in Minnesota. This is her story.

The story of my first demonstration

Monday, May 25, as you are no doubt aware, an African American, George Floyd, was killed in cold blood by a white officer. I happen to see the headlines later that evening, and my first reaction is, “Pff. More American madness. ” But, stoic Burundian that I am, it does end up shaking me to the core.
Back in Burundi I remember having often seen this kind of murder on France24 TV; people cry for their loved one for a few days, then everything goes back to how it was before. Justice is never done, it’s always the same in the United States, even in the movies.

Even though I have seen this kind of scenario many times, something different resonates in my heart this time: not only do I currently reside in the United States, but I live in Minnesota, about 40 minutes (by car) from the crime scene. An indescribable feeling is in my heart, I feel weird.

Tuesday, May 26, I decided to go on YouTube to try and get more information about the case. Obviously, I come across the video where we see the 46-year-old African American on the ground, his neck crushed under the knee of a white police officer, who seems untroubled. I’m having difficulty watching the video, I’m nauseous and I’m in pain for George. I am confused. I close my computer.

I spend the next few days scrutinising YouTube to see what is being done and what is being said, rage has taken over, people can take it no longer, all races are on the streets demonstrating. A bank catches fire, a supermarket is robbed, and many other institutions are devastated. “Minneapolis is on fire”. I see this headline several times.

The Burundian in me…
I am at the table with five friends, three African-Americans, a Ghanaian and a Kenyan. They are trying to convince the Ghanaian to join an important meeting which will take place on Friday to “discuss” what should be done. As a nice Burundian girl, I want to laugh and say “Mwibaza ngo muri tape?” (who do you think you are?), but I restrain myself. Why do they feel compelled to do something? They are just students, a tiny drop in the ocean. Will their actions overthrow the entire discriminatory system? Their certainty impresses me. I wonder how they were raised; it must feel cool to feel able to make a contribution, minimal as it is. I then thought of Burundi where after each party people ask “Haje bangahe?” (how many people came?) and decide on that basis whether the event was a success or a failure. In Burundi, people only feel confident when they are surrounded by a thousand others. But here, people don’t care about numbers, only ‘honest presence’ matters. I remember working at a concert for 60 people, people were happy; I once went on a radio programme, we only had seven people listening to us … but only honest presence counts!

But hey, I keep asking myself why I should be as concerned as my African American friends are. Above all, I should be concerned because I am Black. But there is a difference here: I am African before I am black. All my life, I learned to be African, to dream and to express myself as an African. Given that I am in a country where racism is very real, I must now learn what exactly it means to be Black, because here, people do not see me as an African but as a Black. Goodbye innocence!

Then I get into a discussion with my Burundian friends. We are talking about a video posted by a Burundian media organisation on YouTube which was removed “for security reasons”. The video featured a woman who was allegedly persecuted and tortured. A difficult testimony to watch, which testifies to the violence that many Burundians face every day of their lives. But nobody talks about it. In Burundi, if it is not to give glory to God, my voice does not count. Everyone is talking about what is happening in Minnesota, nobody is talking about what is happening in Burundi.

Any long journey begins with a first step…
Saturday May 30, a Zoom meeting bringing together black students from campus is taking place. I don’t know if I’m going to participate.… I tell myself that it’s still these African Americans with their incessant desire to want “do something”. I am embarrassed and angry because I still don’t know why / how I should do something, knowing that I am black in the United States. I was not raised this way. This seems to me a privilege that I have never known. At home, we are silent, we do nothing, we let God do it.
There aren’t any good films to watch so I say to myself “reka ndabe ivyo barimwo” (let’s see what it’s about). I join thirty minutes late, the meeting is very serious. I see African American students and teachers, Africans and some Latinos too. I listen, I try to understand. They are angry, sad and upset. Something has to be done.

An event is planned for the evening from 17.00 to 21.00. Nothing violent. I tell myself that this is my only chance. I couldn’t do anything about the crisis back in Bujumbura in 2015.  On the one hand, I want to go, but on the other hand I hesitate – what if everything goes wrong and the police stop me, my visa is canceled, and I return home without finishing my studies? Am I really going to risk my life for a cause that does not concern me “directly”? Alas, my curiosity is stronger., I don’t care, I have to go, even if only for ten minutes. To my regret, none of my friends seem to want to go, my heart breaks a little, I lose hope.

At 19 hours 54 minutes, a girlfriend (finally) says to me “Let’s go!” I get up quickly, put on my jeans and wear a sweater because it’s cold outside. Then I opt for closed black shoes because they are very comfortable for running, in case something happens.

20 hours 11 minutes. We walk, we are afraid, we think of our visas. We are approaching the meeting place. We already hear voices resonating in chorus. I can’t believe it. It looks like a movie, I am consciously going to my death. My friend leans on my arm then says a prayer for God to protect us. I laugh and we move on, in silence.

Baptism of fire…
Here they are. About twenty people, maybe thirty, singing in chorus “I-CAN’T-BREATHE”. I see someone waving the famous “Black Lives Matter” sign, it all seems unreal to me, I’m excited and nervous at the same time. I am also jealous, because I realise the privilege that these people have in this country, they have the right to speak, to shout out their anger and make their voices heard.
Then I see my soul mate, an African American woman wearing a Bob Marley t-shirt, she seems convinced of what she is doing, clenched fist and megaphone to her mouth, shouting again and again “I can’t breathe”. I want to be her one day, to emit the same audacity, to move a crowd to break down cycles.

I notice the passers-by in cars, some stop to shout “strength” to us, others video us before continuing their journey. Below my mask, I smile because I know that, now, I exist in someone’s phone, somewhere in the United States.

I have neither the courage nor the strength to sing with the rest of the crowd. I don’t know where to start; I don’t know if I should whisper or shout loudly. I wonder what it would mean to shout loudly. I have too many thoughts, I even think of my parents. I stay there, standing, arms crossed and watching. I read the faces. I feel the present pain. The participants are young, and they seem determined. I admire this courage.

A notebook passes in front of me, I’m asked to write down my contact details. The Burundian in me is wary and I tell my friend that we are not going to sign anything. We pass the notebook along with a smile.

It’s almost over. The Bob Marley girl asks us to kneel in honor of George Floyd, and all the other victims of racism. I feel myself participating in something historic. I feel my adrenaline rising. Left or right knee, I don’t know which one to put on the ground., I don’t think, I kneel. SILENCE. Then, words of thanks, and they beg us to be vigilant, to not send text messages because the police are monitoring everything.
Leaving the scene, I feel as women do when we leave our first appointment with the gynecologist, perplexed but relieved at the same time.

I learned a lot.

My very first demonstration lasted about twenty minutes and I did not die. If it takes place again I will be there because, I’m Black. Right now, all I can say is ‘to be continued’.

Read the original blog in French by Aarnie Dushime here.

You can read the reaction (in French) by a Habari RDC contributor here. 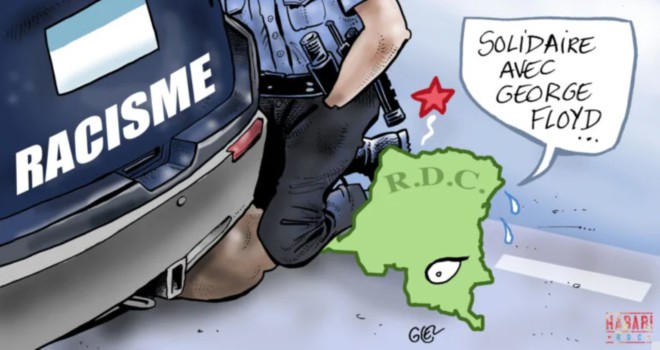 read more
”The truth is what will guide us”