The #BurundiSansBoost campaign is continuing to attract attention. ‘Boost’ is a heroin-derived drug whose use is rife amongst young Burundians, so RNW Media’s Yaga Burundi project decided to launch a series of information, awareness and advocacy activities around the damage the drug was causing. The campaign officially ended on 31 December 2018, but one of its elements – the video ‘Letter from a Junkie’ – has already attracted 37,000 views since then, and the Ministry of Public Security has made the fight against boost a national priority.

The Yaga team was motivated by the lack of information available on the dangers of Boost, the stigmatization of users of the drug and the seeming lack of willingness by public authorities to take action. People using boost tend to be between 15 and 30, get virtually no support or treatment and often turn to crime or sex work to pay for their habit.

#BurundiSansBoost had two main objectives: to create awareness and discourage young people’s use of boost; and to advocate to persuade the authorities to take appropriate measures to fight boost and provide treatment for addicts. Online, the Yaga website and social media channels published articles, visuals and videos reporting on the issues. Offline activities included awareness raising workshops in schools, public debates in four provinces and a news conference. Before launching the campaign, the Yaga team lobbied people in power so they would have decision-makers as their allies.

The campaign launched in April 2018 with the publication of the first article on the Yaga site and continued in May with awareness campaigns in schools. Before the campaign, the authorities seemed disinterested in the challenges posed by Boost. But in informal discussions with government officials, the Yaga team saw this changing. Then in June, in a statement marking the UN Day Against Drug Abuse and Illicit Trafficking, the Minister of Public Safety referred to #BurundiSansBoost articles highlighting the urgency of the situation. He promised to establish a clinic providing treatment for Boost addicts.

‘Letter from a junkie’

The online campaign continued, and offline activities were resumed in November and December with the holding of public debates attended by students, parents, educators and government officials and concluded with a press conference attended by journalists and representatives from the Department of Health. The campaign officially ended on December 31 with the publication of a mini-documentary created by Yaga ‘Letter from a Junkie‘ which has since attracted almost 39, 000 viewers on social media.

In total, Yaga published 14 articles in French and Kirundi and 11 videos, the campaign content has been viewed around 73,000 times in total so far.

Further evidence of the continuing involvement of public authorities in the fight against Boost came with the arrest of three police officers and a magistrate accused of receiving bribes from drug traffickers. Another on-going effect of the campaign is the strengthening of two local partners who took part in the campaign, BAPUD (Burundi Association of People who Use Drugs) and ABEM (Burundian Association of Medical Students) BAPUD has now been able to establish on-going cooperation with the Burundian police for their ‘Support Don’t Punish’ campaign due to the visibility their activities were given on Yaga’s platforms.

The human face of addiction

The #BurundiSansBoost campaign was an opportunity for Yaga to establish itself as an influencer in Burundi’s media landscape. By sharing the testimonials and stories of Boost users, Yaga also gave a human face to the the people who use the drug. The fact that many were willing to speak with Yaga without covering their faces is a sign of the trust they have in the platform and the values it promotes. 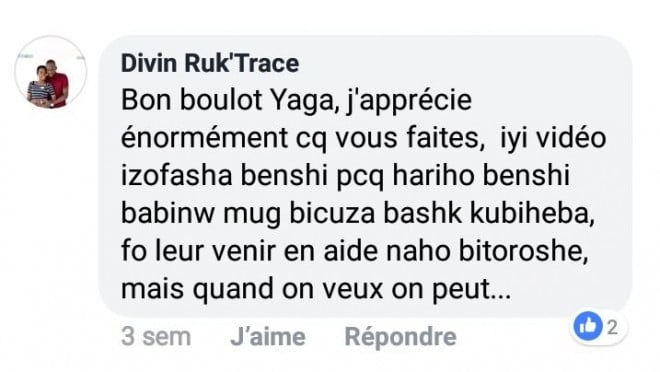 Translation: Good job Yaga, I greatly appreciate what you do, this video will help many of us, because there are young people who continue to consume this drug in spite of themselves but dream of stopping, you have to help them even if it’s not easy, but when you want to you can.

Comment left by a viewer of Letter to a junkie

A letter to my lost clitoris
Scroll to top