RNW Media’s Love Matters and Citizens’ Voice platforms in 10 countries took part in the recent 16 Days campaign with each team focusing on a form of GBV that resonates in their local context. Intimate partner violence (IPV) and domestic violence were the central topic for Love Matters in Nigeria and Kenya and for the Citizens’ Voice Benbere platform in Mali. GBV within relationships is a serious problem in all three countries and raising awareness and starting a broader conversation around the issues was the aim of the campaigns.

When love goes wrong
The campaigns included ‘16 Tales: #NotAHappyEnding’ – a series of true-life stories from individuals who have experienced GBV in Nigeria. Love Matters Kenya posted more than 10 articles and blogs, including personal stories, with the theme: Love Must Not Hurt.  One of their articles highlighted the many forms IPV can take – not only physical and sexual violence but also mental, emotional, and financial violence.  In Mali, Benbere published a series of articles and under the hashtag #MaliSansVBG and also organised free off-line events including performances by artists and actors popular with young Malians. 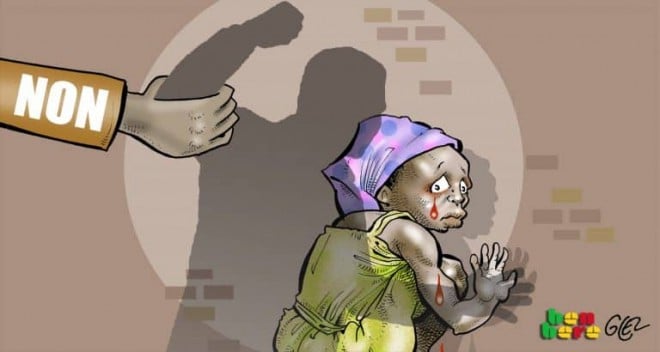 A cartoon from the Benbere campaign.

GBV in the workplace
Dealing with sexual harassment at work was the theme of the 16 Days campaigns in the Democratic Republic of Congo and in Egypt. The Habari RDC and Amour Afrique teams jointly organised a series of discussion events called “Faces aux Jeunes” in 4 regions of DRC, as well as posting articles online. The Faces aux Jeunes events aimed to provide a space where young women could speak freely and share their experiences of GBV on the work-floor. Together with human rights defenders, participants discussed strategies for dealing with the issue and were encouraged to report any violence or harassment they experienced.

The Egypt-based Love Matters Arabic and Masaraat platforms implemented a number of online activities aimed at three groups: working women who are targets of GBV in the workplace, their managers and their colleagues. A video was created addressing the issues through a range of different scenarios. The video illustrated the differences between harassment and normal interactions between colleagues, the role of power relations, and potential resolutions. The teams also published multiple social media posts for each of the 16 days on topics such as support systems and laws against harassment.

In China the Justice4Her and Love Matters teams worked together with UNWOMEN on a social media campaign around the official UN theme #OrangeTheWorld – generation equality stands against rape. Key opinion leaders active on Weibo – one of China’s most popular social media channels – shared specially created #OrangeTheWorld posts on their personal account along with their own pictures or short videos. Followers were also encouraged to share images of themselves wearing orange to show their support for survivors of rape and other forms of GBV.

Talking with men about GBV
The Citizens’ Voice team in Libya and the Love Matters India team both included activities targeting men in their campaign designs. Together with UNFPA, Huna Libya focused on domestic violence – physical, sexual and economic. Their campaign aimed to encourage young men not to use violence and to raise awareness of GBV. Personal stories were also shared in videos where young people were asked about their relationships and if they had ever experienced violence in a relationship.

Love Matters India took as the starting point for their 16 Days campaign the influence the #MeToo movement may be having on young men’s views around gender, sexual relationships, intimacy and consent. The team began by conducting focus group discussions (FGDs) with diverse groups of men in Delhi and the findings were used to create online content understanding and unpacking “modern masculinity”. Most participants in the FGDs said it was a misconception that men were only interested in the physical aspect of the relationship and agreed that a constant fear of being judged prevented men from sharing their feelings and emotions.  Click the link below to download a pdf of the full report.

Theatre and flash mobs
GBV in Yemen has increased by 63% since the beginning of the war and although some services are available knowledge about these services in limited and GBV survivors are often left without help. The 16 days campaign in Yemen aimed to encourage victims to seek help and to increase the visibility of the services available. Other activities targeted young Yemeni men by looking at GBV from the point of view of the harasser. An interactive theatre piece was presented at 10 different schools and universities where audience members were invited to take part by playing one the characters and showing how different actions would lead to different reactions. The Yemen team got their campaign off to a spectacular start with a flash mob in Sana’a where a crowd of young people sang a specially created song.

Necessity not luxury
The Yaga Burundi team took a unique approach to the campaign by focusing on the high costs of menstrual hygiene products and the struggle Burundi’s women and girls face around this issue. There is a tax on sanitary pads of 18%, and the campaign advocated for the removal of this tax. A variety of online and offline activities were undertaken including raising awareness, the distribution of sanitary pads, and trainings on menstrual hygiene for different communities. A key message of the campaign was that sanitary napkins are not luxury products but an essential need for the health and well-being of women and girls. 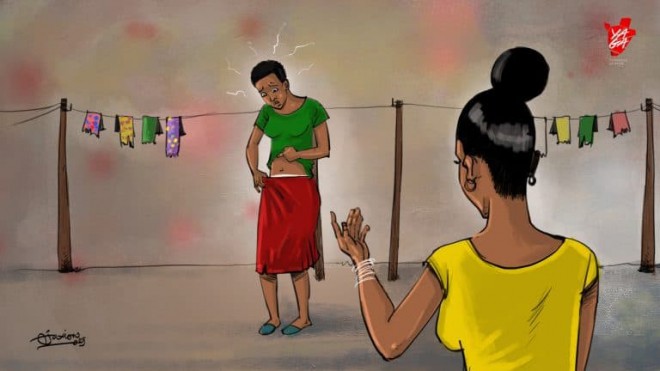 A cartoon from the Yaga campaign

RNW Media colleagues from all around the world also took part in a video launching our organisation-wide campaign in support of the 16 Days of Activism.  #JustAnotherDay  aimed to raise awareness of that fact that while GBV can happen anywhere, anytime to anyone it is never ‘normal’.

*The experiences described in the video are not those of the persons featured but are based on true stories.