The United Nations is marking its 75th anniversary this year with a wide range of activities that look to the future and ask what kind of world we want to see in 25 years’ time when the UN will be 100. RNW Media was one of the organisations contributing to an online session on Saturday that brought together young people, politicians, dignitaries and representatives of international institutions to share their ideas on implementation of the UN’s Sustainable Development Goal 16:  a peaceful, just and inclusive society.

‘UN75, Shaping our Future together” was organised jointly by the International Court of Justice, the Hague Project Peace and Justice, UNRIC Benelux, UN Chair the Hague, UNU MERIT and Hague Talks. with RNW Media collaborating on the content of the session.

“We face colossal challenges. With global solidarity and cooperation, we can overcome them. That’s what the UN is all about… the UN not only stands with you, the UN belongs to you and is you.”

Role of youth
The importance of young people’s role in peacebuilding was emphasised by Judge Abdulqawi Ahmed Yusuf, President of the International Court of Justice, who said:

‘” You [the youth] can foster tolerance and understanding among nations and within nations. You can educate your peers not to hate those who are different, and to live in peace and harmony with others.”

His message was echoed by Foreign Minister of the Netherlands Stef Blok who urged young people to engage with the aims of the UN’s SDGs.

“Not only because today’s problems are your problems but also because you can solve those problems. Join the conversation. Not just today, but also tomorrow. Make your voice heard.”

“To accomplish our collective goal of sustainable peace, we need all global decision makers to support a positive discourse on youth inclusion, empowerment and participation, while also investing resources in youth-led peacebuilding initiatives.”

The future we want
The online session followed a series of dialogues with young people to debate the future of peacebuilding activities globally and the role of the UN in integrating young voices in decision making processes. The overall theme of these dialogues was ‘The future we want, the UN we need’. Our Justice4Her project in China joined this series by organising a webinar on Beijing 25+, GBV and international cooperation. The webinar resulted in 38 recommendations which were integrated in a final report prepared by UNU Merit.  Many of the recommendations from the young Chinese people emphasised the need to include women’s perspectives in policy and decision making and urged the UN to ‘value the power of women’.

Idealism and criticism
Some participants were highly idealistic:

Hello, I am a Chinese girl, I am very ordinary and I do not reject any country. However, I really hope that one day I can see that countries respect each other and no longer clash with each other. (War itself is against humanity, countries that really respect human rights will never start a war.) I hope that environmental issues can be addressed and a way out is found for sustainable development. Also, I would like corruption to improve in all countries. I don’t know if I’m delusional, but I don’t want to wake up from this dream.

But there was also criticism for the UN and other global institutions:

Will the United Nations still exist in 25 years? Does the United Nations still have a “controlling” capacity today? Judging from the WHO’s role in the global epidemic, its intervention is useless. Let’s hope that intergovernmental organisations, such as UN, can truly find their role in the global ideological conflicts. I thought about this, and I don’t know what to suggest, but I would like to say that I don’t want to see a war.

Jobs for peace
Amr Mohamed, who works with RNW Media’s Citizens’ Voice and In the Works programmes in North Africa joined the session to discuss the importance of young people’s economic inclusion to support peacebuilding. He pointed out that young people, especially young women, face greater barriers than adults to securing decent employment and the COVID-19 crisis is compounding the problem.

Amr stressed the importance of digital upskilling, reliable labour market information, job search assistance, technical and soft skills training to address the barriers to youth employment. He called on the UN and decision and policy-makers to support initiatives which increase opportunities for youth, in particular decent work for women and lobbying for the employment of more young women in the private sector.

You can watch the full session here.

Click to download UNU Merit’s full report on the UN75 dialogues. Future of the UN – A Youth Perspective 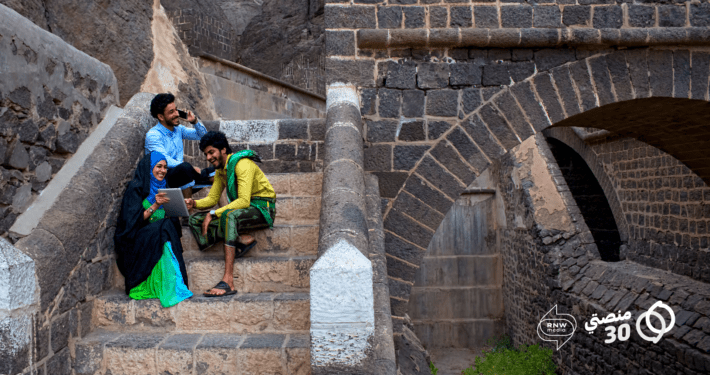